In The top of the mountain after all effort for difficult climbing you find a huge and beautiful Castle which remind you about some people who fought for their homeland, the people who believed and for their creed, they fought and died. 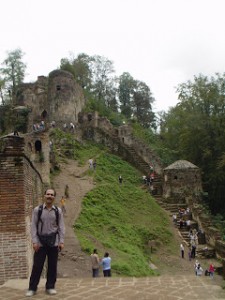 We’ve heard aboutIsmailiyyah and the story of Hassan-e Sabah and their castles all over Iran – ALAMOUT in Qazvin is the most famous of them- you can find history of their power in all cities of Iran. They made castles and live in it. Rudkhan Castle is one of them. It was a military complex which had been constructed duringSeljuk Dynasty by followers of Ismailiyyah sect.

The castle located on one of the heights of Alborz mountainrange in the midst of dense forest. It is Located 25 km southwest of Foman city north of Iran in Gilan province, with an area of 2.6 hectare, about 1500 meter wall and 65 meter of the tower and rampart. The Castle has been constructed at 665-715 meter above sea level.

Maybe it was built in Sassanid Empire, it was repaired renewal at Seljuk Dynasty, also in the same period it was the shelter of Fellowship Hassan-e Sabah.

Many years ago when I was young and tried to go hiking and mountain climbing I stayed one night in this castle, I stayed a night in glory of silence, without any artificial noise. I heard sing ofNightingale, birds, watch huge trees, wall stone, and tower. I was surprised to stay in a place which my brothers fight with enemy and defeat them.

In the morning I found big trees which used to be a nice curtain to hide castle for protecting it from evil enemies. But now a day the Trees are the enemy. They tried to kill castle. Rote of tree and humidity of climate made wall as ruin.

But these years, as if the magic hands have been busy rebuilding the Castle’s ability. Part of the castle is rebuilt. It is nice to protect our asset for futures to show them who brave people have lived in this country regardless of their opinion. May be we did not accept their religion but we have to admire their Endurance and resistance to fight enemy.

A beautiful Castle on the top of the mountain is stay to climb on the slippery wet step, was a place of archers and soldiers who defense castle of enemy. Now a day you can go up and go in the castle through the open gate without any fear of archers. The gate is open for lots of people who are eager to know about their past and try to learn about it.

Seeing Rudkhan Castle again after many years was surprisingly joyful and full of happiness for me. My children walk on top of the mountain and tried to be in the right time of castle, the time of splendor, glory and magnificent

I was happy to show my son and daughter about my homeland. 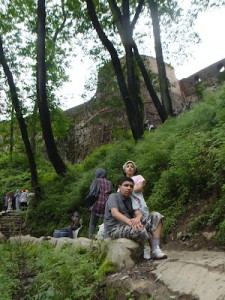 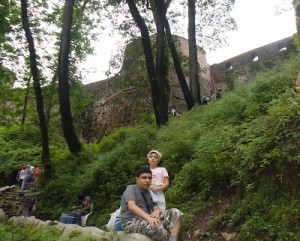 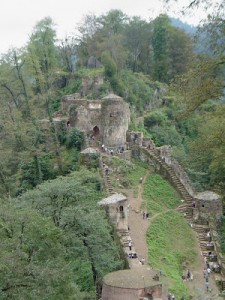 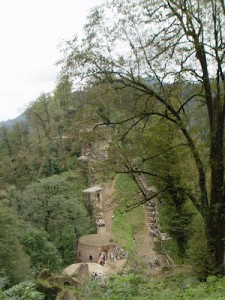 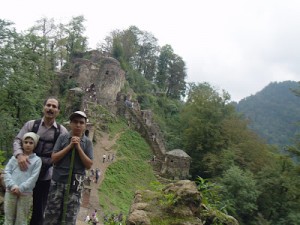 a family in the castle

This entry was posted in memory, opinion. Bookmark the permalink.