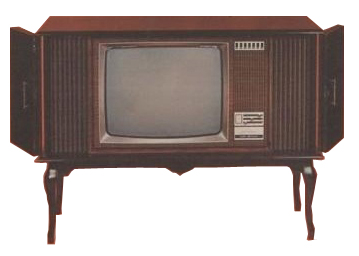 The old Schaub Lorenz television enchanted everyone, with its awesome wood, the bright brown color and its door made every one die for it. The door, that had two pieces, you had to open them both; it seemed like a living room waiting for guests.

You had to open them with patience to prevent any probable damage to its lamp.
On the top of TV there was a vase too, a decorate table and a TV. Although for us it was more decorative that a TV.

The first time I saw the TV in our house, I went to elementary school, which meant that the Cruel Shah[1] was still hurting every one and there was no “down with the king”. I had to go to school in the morning for a week and then the next week I had to go to school in the afternoon, and when it was the afternoon-school-weeks, I understood the meaning of “hurt” when the good cartoons were on TV and I was at school.

Two men brought the big box in and started to open it and assemble it, they asked for a ladder to go to the roof, at first it was strange to me, but when the antenna was assembled and TV started playing the shows, I understood everything, all the works was for these images

During first days, TV was at a place where you could see the TV outside but you couldn’t hear anything, we stood outside the house, looking at Yogi and the other Jungle animals doing strange things, and went to school unhappily, or when Plastic man did something amazing, Batman and Robin and a lot of others who did spectacular things, every time a villain was defeated I couldn’t share their happiness, and I had to go to School. I didn’t want to, but it was a duty, school was near our house and if I spent time outside watching the silence cartoon, I had to run to the school and be fatigued when in the class.

After the Revolution, I understood that there is liberty and equality for everyone, because both students in morning and afternoon couldn’t watch movies. Cartoons were on TV at 5pm, I was in High school then, the old cartoons weren’t good enough but still there were new cartoons such as pink panther and…

After the cruelty of Shah, there was a cruelty from home, we had to study well and do all our homework before watching TV, this was the Ultimate cruelty.” you won’t watch no cartoon until you do all your homework” these mean words came out with such patience, the grown-ups ruled.

We had to listen to the sound of TV, and guessing what is happening, no one gave a damn to ‘homework’ until the movie finished, and then we started to do our homework…

[1] The former king of Iran before the revolution

This entry was posted in memory, opinion, short story. Bookmark the permalink.

1 Response to The old Schaub Lorenz